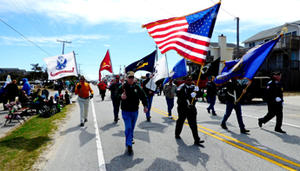 It would be difficult to imagine a parade that more perfectly sums up the Outer Banks experience than Mike Kelly’s St. Patrick’s Day Parade. It’s only a mile long, but packed into that mile along the Beach Road in Nags Head are high school marching bands, a beach chair precision drill team, the Kill Devil Derby Brigade-a local roller derby team. There are giant crabs and dancing children. Every fire department from Hatteras to Duck sends fire trucks. Candy flies from every conceivable source.

It is, quintessentially and uniquely, all-American and Outer Banks. A gathering of families under a deep blue sky; children squealing with laughter and joy rushing to gather in as much candy as they can; the only requirement to participate seems to be filling out a parade application-there does not appear to be any vetting of who gets to march.

The end result is a blending of traditional parade stuff with the bizarre and wonderfully different-and it’s been that way since 1989.

If there is a kickoff to the spring season, the Kelly’s Parade is it. Next weekend, it’s Taste of the Beach.