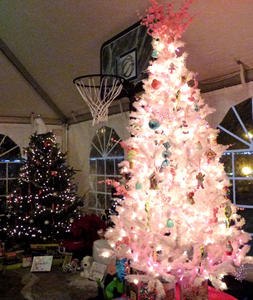 Outer Banks Hotline and Children at Play got together this year and combined Santa and the Train with the Festival of Trees, held everything at the Outer Banks Brewing Station and it was fantastic.

Santa and the Train is wonder afternoon of children delighting in being children and three or four hours of adults remembering the joy of childhood during the holidays.

In the backyard of the Brewing Station a golf cart is hauling around three or four cars decorated in Christmas scenes. The cars are filled with little kids.

Inside there is Santa Claus, crafts and a sock skating rink which has kids sliding, falling and laughing.

The Festival of Trees in in the huge tent out back and it’s hard to tell, but it looks as though there are more trees filled with gifts than ever.

This is the 26th Annual Festival of Trees, and it is the major fundraiser for Outer Banks Hotline. Santa and the Train is also a huge fundraiser-Carole Dawn Emerson the Executive Director for Children at Play remarked that the money raised at the event enables the organization to keep their doors during the winter.

The Festival of Trees has moved around a bit over the past few years, but it seems most at home at the Brewing Station for some reason.

Festival of Trees especially is truly a community event with numerous Outer Banks businesses contributing trees, auction items and gifts to throw into a raffle.

A great way to celebrate the holidays.