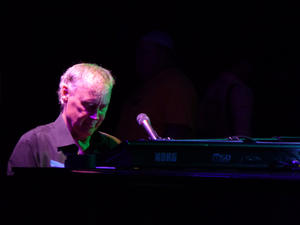 Now that was a night to remember.

Bruce Hornsby and the Noisemakers played the Outer Banks last night and wow was that a great concert.

It’s part of the Brew Thru Summer Music Series, with bands playing on the outdoor stage at Roanoke Island Festival Park in Manteo. The next show is Live on July 10 followed by the Gin Blossoms on July 17.

The opening act may have been the most impressive, though. Chessboxer consists of Ross Holmes or mandolin and fiddle and Matt Menefee on banjo and guitar. Holmes also plays in the Noisemakers. It seemed as though they hit just about every musical style there is-bluegrass, Celtic and Scottish folk, jazz and they finished up with a classical piece by Claude DeBussy.

It would be hard to imagine a better setting than RIFP. The sun was setting, there were boats out in the sound, a nice breeze picked up, families and couples were spread out everywhere and then Bruce Honsby and the Noisemakers walked on stage.

They left not doubt about why they are the headliners. Creative arrangements, tight musically, great musicians, everything you go to a concert for.

Hornsby did break out his dulcimer-that’s a traditional three-stringed bluegrass instrument-and what he performed was a wonderful synthesis of tradition and a little bit more.

It would be hard to imagine a better evening of music.