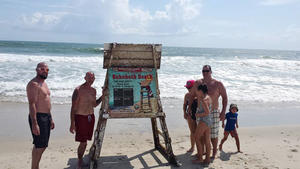 On the Salvo beach with the Rehoboth Beach, DE lifeguard stand.

Under the heading of &ldquo;you can’t make this stuff up&rdquo;-a Rehoboth Beach (DE) Lifeguard stand washed up on the Salvo beach Monday.

Completely intact, a bit worse for wear but still serviceable, the chair made the 275 mile ocean voyage in about two months.

Six were recovered relatively quickly floating in the surf along the Delmarva Peninsula showing up from Ocean City to Assateague, but the whereabouts of the seventh remained a mystery until it showed up in the surf on Monday in Salvo.

No one is quite sure what to do with the stand right now. Rehoboth Beach isn’t sure if it can be salvaged since it floated in salt water for two months. As beach flotsam goes, it much too big to qualify as driftwood and there doesn’t seem to be any convenient place to store it.

Nonetheless, it’s an interesting tale of the forces of nature, showing how ocean currents flow and where the debris of our vacations may come to rest.

Lost in all of this is the prank that started the process-which really wasn’t much of a prank. If it was meant as a joke, it seems in poor taste and dangerous; it could have put lives in danger.