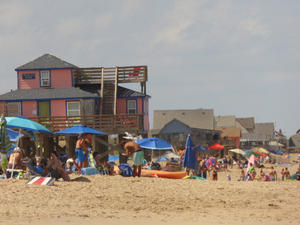 Wow! What a spectacular way to wrap up the summer of 2014 on the Outer Banks. Temperatures nudging 90, a nice SSW breeze, water temperatures in the mid 70s . . . it just doesn’t get much better than this.

It’s been a good summer, Hurricane Arthur notwithstanding. That was definitely an oddity. July Hurricanes in the Atlantic Basin aren’t very common in July, and very rare for the Outer Banks. The last July hurricane to come ashore here was Alex at the end of July 2004 and that affected Ocracoke only.

Arthur was here and gone so quickly though, that it hardly caused a ripple, although in typical Outer Banks fashion, rescheduling July 4th fireworks was taken with a shrug and an &ldquo;of course we can handle this&rdquo; attitude.

Even though summer is wrapping up, there is still a lot to do this fall. Two September events to put on the reminder list:

The ESAs (Eastern Surf Association) championships are scheduled September 14-20 at Jennette’s Pier in Nags Head. It’s an amateur competition, but with surfers coming from all over the East Coast the level of performance is excellent.

The 3rd Annual Outer Banks Bluegrass Festival is September 25-28 at Roanoke Island Festival Park. Headliner Ricky Scaggs will be there Saturday night. Friday night it Rhonda Vincent who headlined the past two years and wowed everyone.