And now there are four—that’s right, now there is one more microbrew on the Outer Banks.

Unlike the other microbrews, Northern Outer Banks Brewing is not going to have a pub or restaurant on premises, although located at the shopping center on Old Stoney road between Cosmos and Metropolis there will be plenty of great food available.

According to reports the beers will be available at a number of locations. Here’s what the reporting says: Black Pelican, Hurricane Mo’s, Mulligans, Lucky 12 and The Pier House Restaurant. Four packs are available from Manteo to Corolla. Check out Buffalo City Jug Shop, Trio, Chip’s Beer and Wine, Tommy’s Market, 7-11, Stop N Shop, Brew Thru, Butcher Block, OB Gas Corolla and Tommy’s Market to see what Norther Outer Banks Brewing is brewing.

However, we looked around and it doesn’t look as though the microbrew is in full production yet.

In our quest to insure accurate and timely information for our Joseph Lamb, Jr. readers, we were going to taste all four beers and report on our findings. Unfortunately a trip to two of the listed locations—Trio and Chip’s—only turned up the Penny’s Hill IPA.

After much internal discussion we decided to forego waiting for all four beer to be available and just go with what we had. Besides, it was calling to us from the refrigerator. 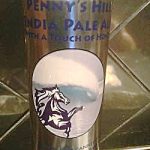 Looking or a big hoppy IPA with a dry finish that leaves you begging for water? If that’s the case, this is not your beer.

Unlike many of the modern IPA that are out there, this is a very well-balanced beer. Yes, there is a bit of a hoppy finish, but it’s full flavored ale.

This is a beer that would go with a wide variety of foods, or do nicely as a standalone sipper at any time of the year.