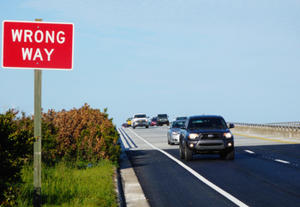 Although the westbound span of the twin bridges was the most recently completed, the outbound road never offered the smooth almost seamless ride the inbound lanes did. The expansion joints that allow the road surface to expand and contract with temperature differences never seemed to be quite right and as a result the ride was bumpy swaying trip over the Currituck Sound.

That rough ride also contributed to the damage to the road surface and a decision by NCDOT to strip the bridge to its expansion joints, put them in correctly and resurface the road.

The plan was to close the westbound bridge after the 2013 summer, work all winter and have the bridge ready for 2014. Then a harsh 2014 winter set construction back and the bridge had to reopen for summer traffic safe, but clearly unfinished.

After the 2014 peak season ran its course, construction crews were back on the job, finishing the repaving and as of Wednesday of this week, both spans are open again.

The new surface that was put on the bridge is a latex concrete-an expensive process, but by all accounts it will pay for itself in greatly reduced maintenance costs.