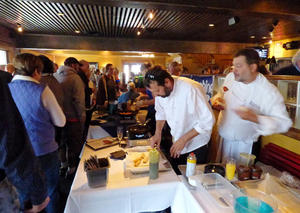 Metropolis at the Shrimp Cook-off.

Oh, what we do sometimes for gourmet treats. This past Sunday, as it turned out, may have pushed the line on how much great food can be eaten in a relatively short period of time.

With two cook-offs at the same time on the same day, there was a lot of food to go around and all of it was outstanding.

The original plan called for the first every Fish Taco Cook-off to be on Saturday at the Sea Ranch Resort followed by Sunday’s fundraiser for the Outer Banks Center for Dolphin Research–the 5th Annual Shrimp Cook-off at Ocean Boulevard.

Mother Nature took care of that plan in short order with a fast moving coastal storm that forced the Outer Banks Restaurant Association to move the Fish Taco event to Sunday.

The problem, though, was how good everything was-not that there were two simultaneous events. It was impossible to not go back for seconds . . . and an occasional thirds.

As it turned out the Fish Taco Cook-off got moved back an hour to try to allow the weather to improve a bit, so the afternoon started at the indoor Ocean Boulevard Shrimp Cook-off.

Couldn’t possibly pick out a best of . . . it was all so good. Metropolis had a very different shrimp and cheese tapas that stood out because it was like nothing else there, but Dan Lewis of Coastal Provisions was cranking out some amazing shrimp and grits, and who’s to say if those were even the best.

Then it was on to the Fish Taco Cook-off.

OK, it was cold. During those too infrequent moments when the sun would come out, it wasn’t too bad, but the north wind was certainly a part of the day.

But the tacos . . . oh, the tacos. Tuna, even a tuna tartare from Chili Peppers for the sashimi lovers, mahi mahi, blackened red fish from Lone Cedar Cafe.