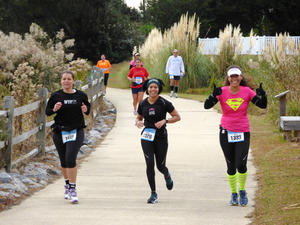 A big thumbs up for the 9th Annual Outer Banks Marathon.

What a fantastic weekend we just had for the Outer Banks Marathon. The Sunday 26.2 mile run from Kitty Hawk to Manteo is, of course, the crown jewel of the activities, but over the years, what started as a one day, one event happening has expanded to a family fest celebrating fitness.

There is something for everyone. Saturday features a diaper dash, one mile fun run, a 5K and 10K, and looking over how many people competed and the ages of the competitors, the concept of creating a weekend for the whole family seems to have borne fruit.

The Marathon is the big race for the weekend. It would be hard to imagine a more appealing run, passing through the dense growth of maritime forests, skirting the base of the Wright Brothers Monument and passing by Jockeys Ridge, there is no other run quite like it. And that’s not just us saying that; the national press as well as a large number of runners have remarked on the beauty of race.

There is also a half marathon run Sunday morning that begins in Nags Head and like the Marathon, ends in downtown Manteo.

Because it’s in the shoulder season, here at Joe Lamb Jr., & Associates. we are able to offer partial week stays. We’ll be able to do the same thing next year, so start planning now.

Outer Banks Sporting Events the organizer of the Marathon, sponsors three other races throughout the year-the Flying Tiger Half Marathon in April, Storm the Beach in June and the Outer Banks Triathlon in September.

The 2014 Marathon winner was Bryan Morseman from Bath, NY finishing at 2:27:39. Ginny Cronley from Greensboro crossed the finish line at 3:00:17 as the first place woman runner.