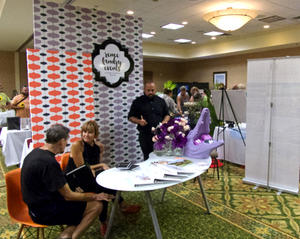 After a weekend of activities, parties, late night shows and even some Gilbert and Sullivan, it seems somehow fitting that one of the last events of OBX Pride Fest would be the first ever Weddings With Pride Outer Banks LGBT Wedding Expo.

Held at the Hilton Garden Inn in Kitty Hawk on Sunday afternoon, it was pretty much like any other wedding expo except it was smaller-the LGBT wedding market is still an emerging one-and only lasted two hours not two days. But it still had all the trappings of a the Outer Banks Wedding Expo that is held every January-lots of food from caterers, some officiants, great music, wedding planners.

And the couples talking to vendors were a lot like the January Wedding Expo couples . . . excited about their plans, excited to be coming to the Outer Banks to get married and asking pretty much the same questions.

The Outer Banks has been one of the premier wedding destinations in the country for a number of years, and although a number of the vendors we spoke to felt this was the right thing to do, there was also a feeling that this made very good business sense.

&ldquo;This is the largest emerging market,&rdquo; one of the vendors remarked.