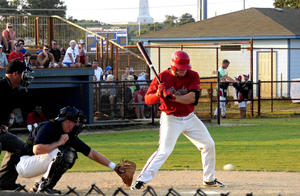 Hoping for their chance at professional baseball, collegiate ballplayers make their way to the Outer Banks every summer hoping their skills will catch the eye of a scout. To David Menzies that’s a compelling story, and he’s hoping his reality concept, Bush League: The Show, will make it to the big leagues of network TV.

He just spent the week here on the Outer Banks, filming games, talking to sponsors and telling the story of 20 some kids with good skills and big dreams.

The Outer Banks Daredevils play in the Tidewater Summer League, a collegiate league that gives college kids their first taste of playing under major league rules. Although much of the basics are the same, for many of the kids it is the first time they have swung or pitched to a wooden bat.

The difference is significant-aluminum bats generate the same amount of power no matter where on the bat the ball strikes; wooden bats have a 5&rdquo;-6&rdquo; sweet spot. It changes how batters hit, it changes how pitchers pitch, and if a player can’t make the adjustment, they’ll never make in the &ldquo;Show&rdquo;.

The Outer Banks Daredevils play at the First Flight High School Ballpark in Kill Devil Hills. Ticket prices are very reasonable, it’s a great evening of family entertainment and something different to do on the Outer Banks. Their season runs through August 14 with home games Monday-Thursday.

They are currently in first place in their league.