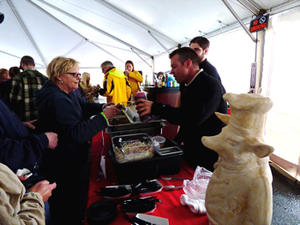 What an amazing Taste of the Beach the 2015 version has been. The Joe Lamb Jr., & Associates. BBQ &amp; WINGS Showdown was amazing, even though the weather through a curve at us with cool temperatures and a steady rain. No matter, plan B went into action and a tent was up at the south end of the Sea Ranch parking lot in plenty of time for ribs to cook and the crowds to come.

Great food too. Interesting that the very traditional ways of fixing ribs, barbecue and wings seemed to carry the day. The big winner had to be SaltyDawg Smokehouse up in Currituck taking three out of the six awards-Judges Best BBQ and Wings and People’s Choice BBQ. Their BBQ was perfect and their ribs were almost as good. Both Pigman’s ribs and SaltyDawgs fell off the bone in and melted in the mouth with a nice subtle smokiness.

The 2015 Taste of the Beach is winding down-today is the last day, with the Grand Tasting wrapping things up tonight at Pamlico Jack’s in Nags Head. There have been so many great event, there just doesn’t seem to be any way to report on all of them.

Put this event on the calendar for next year. An amazing four days on the Outer Banks and great way to learn how remarkable our chefs are.