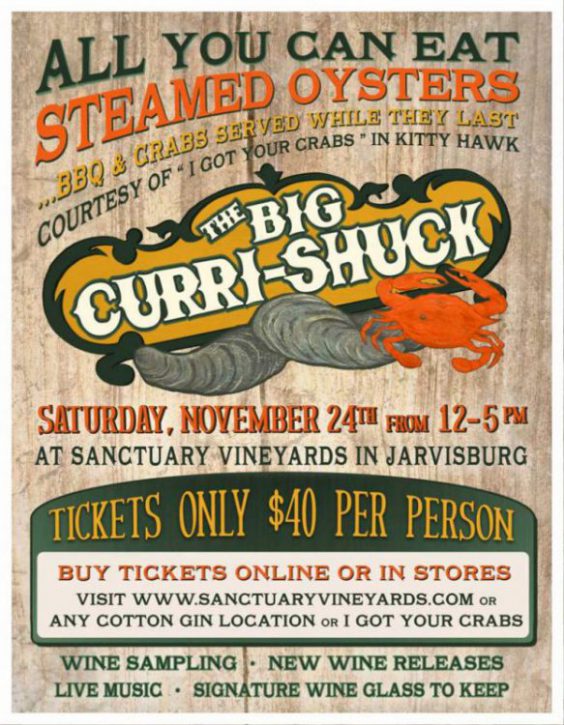 The Big Curri-Shuck is the perfect post Thanksgiving celebration. Thanksgiving is all about food, family and just enjoying the day without worrying about eating too much or really anything.

The Big Curric-Shuck is pretty much the same thing with some live music thrown in.

Held the Saturday after Thanksgiving at Sanctuary Vineyards in Jarvisburg on the mainland, the premise is simple—steam a few hundred bushels of oysters and maybe some crabs as well, and let people eat as much as they want. Add in some local North Carolina barbecue, wines from Sanctuary Vineyards, beer from local micro breweries and great music…well, what’s not to like.

Sanctuary Vineyards is owned by the Wright family, the same folks that own the Cotton Gin—which is next door—and like all events held there, it is kid friendly. Hayrides for the kids all day and the music is great for dancing but the words never have to be explained.

It looks as temperatures will be mild…November mild, low 60s…with some showers. Don’t let the rain keep you away. There is plenty of covered area to feast on oysters and barbecue, so staying mostly dry should not be a problem.

Although there are a number of events sponsored by Sanctuary Vineyards throughout the year, this is the big one—and it is a great time. It does sell out every year and we’re getting close to the day of the event, so contact Sanctuary Vineyards as soon as possible about tickets.

The Big Curri-Shuck is an afternoon event with the door opening at noon and things closing down at 5:00—making it a perfect way to wrap up Thanksgiving Weekend.

The holidays are truly special on the Outer Banks. Check out the great homes that are available through Joe Lamb, Jr. & Associates for the Outer Banks holiday experience.

Big Curri-Shuck-an all you can eat celebration

Great food, great weather, fantastic entertainment and some very nice wines and beer to with everything. Put it all together and it equals a big success for the Big Curri-Shuck, Sanctuary Vineyards celebration of all things oyster.

Still, there’s a reason why the event is called the Big Curri-Shuck, as in shucking oysters.

The event is a cooperative effort between Sanctuary Vineyards and I Got Your Crabs. It does seem like the perfect way to wrap up a Thanksgiving holiday—sort of a big thank you for the bounty of the harvest from the sea.

It’s become a real holiday tradition for quite a number of people—something they watch for a grab tickets as soon as they can. That might be good advice for next year; Hunter Stuart from I Got Your Crabs manages to get enough oysters every year for about 1000-1100 ticket holders, but John Wright, manager of Sanctuary Vineyards won’t oversell. He has said in the past that he’s determined that all you can eat, means all you can eat.

And the oysters were good this year…really good.

It’s not just the oysters that make the event special. Certainly the North Carolina barbecue helps. As does the crab legs. There is something about the setting that seems to take this event to the next level.

Maybe it’s being vineyards and farmland right next to the event; maybe it’s the picnic tables and the wine and beer and the way everyone seems to be in such a good mood. Who know what it is, but there is something about the Big Curri-Shuck that makes it an event that creates great memories.

Fantastic music this year as well.

The Daniel Jordan Band from Elizabeth City were great with their mix of rock, blues and country. Buckshot out of Virginia Beach—amazing. Think country with attitude. Also some of the younger kids from Ruth Wyand’s Mustang Music Program got to take the stage.

Imagine an event that requires the following—eat as many fresh steamed oysters as you can, sample local wine and beer, maybe have some eastern North Carolina barbecue and steamed crab and throw in some really good country music.

That describes The Big Curri-Shuck at Sanctuary Vineyards and Winery in Jarvisburg, 15 minutes north of the Outer Banks.

Right next to the original Cotton Gin, The Big Curri-Shuck has become one of those annual events that should not be missed.

Here are the details. Price is $40, but it’s worth it. Tickets are available at I Got Your Crabs in Kitty Hawk or at Sanctuary Vineyards, which makes sense because I Got Your Crabs is supplying the oysters and the crab. And since the event is on the grounds of Sanctuary Vineyards and John Wright, vineyard manager, is driving force behind the event, of course that’s a source for tickets.

Tickets are also available at all Cotton Gin stores.

The wine—with signature glasses—comes from Sanctuary Vineyards. The Vineyard’s wines have been steadily improving and at this point in time, they are good wines by any standards. The whites especially will go really well with oyster.

The information about the local beer hasn’t been posted yet, but in the past Weeping Radish is always on hand—they’re right up the road—and usually the Outer Banks Brewing Station and Lost Colony Brewery. But that hasn’t ben confirmed yet.

Events at Sanctuary Vineyards are always family friendly events and this is no exception with hayrides for the kids and usually a hay bale maze.

Tickets are limited, so don’t wait.

The 2016 version of the Annual Big Curri-shuck? Now that was a great party.

The premise of Curri-shuck is simple. Gather everyone together the Saturday after Thanksgiving. Give people all they can eat steamed oysters, crab and pulled pork barbecue, have some great local beers on tap, sample wine from Sanctuary Vineyards the host for the event and throw in some really good music.

It also helps that the event is really kid friendly with hayrides all day long.

Two local businesses really stepped up to put the event together—Sanctuary Vineyards in Jarvisburg, where the event was held and I Got Your Crabs down in Kitty Hawk on the Outer Banks provided the oysters and crabs.

As much as it can be, everything is local. Hunter Stuart, who owns I Got Your Crabs is a commercial fisherman, and he is still out on Currituck Sound from time to time, pulling in crab pots.

The oysters were definitely from the Southeast. Difficult to know if they were North Carolina oysters, but a lot of them had miniature crabs in them. The crabs are called pea crabs and they find a happy little home inside the oysters, grabbing a little bit of food as the oyster brings water in to  filter through its system.

They are considered a delicacy, although for anyone who doesn’t know about them and pops open a raw oyster, seeing an itsy bitsy crab scuttle across the oyster can be disconcerting. Of course, the Curri-Shuck oysters were steamed, so no movement from the pea crabs.

The presence of the pea crabs, though, means the oysters had to come from North Carolina or a neighboring state; pea crabs only live in the Southeastern US.

It was a bit cool when things started—bright sunshine but a brisk north wind kept temperatures down. However, gather about 1000 people together, put them inside a tent and pretty soon things warm up.

The music helped too. Croatan Highway and the Dave Cynar Band were fantastic—country with a touch of rock ’n’ roll.

Here at Joe Lamb Jr., & Associates. we’re already marking our calendars for next year. Saturday November 25, 2017 looks like it will be the date. Hope to see you there.