Is the Outer Banks Seafood Festival a celebration of great food, a mini-music fest, or just an all day party?

Hard to tell, because it seems to have something for everyone.

Featuring perfect weather, the 2017 Outer Banks Seafood Festival may have been the best yet. That’s really saying something because ever since the inaugural event, the day has been one to remember.

This year, though, things really seemed to move up  a notch.

The food, as always, was outstanding. This is an event that cries out for group participation. With 11 restaurants offering three to four selections, one person cannot possibly try everything. But with a group and judicious sharing, many more dishes can be sampled.

Local wines from Sanctuary Vineyards were available as well as local breweries Weeping Radish and the Outer Banks Brewing Station.

All of that creates a very local flair.

Maybe it’s the music that takes the day from festival to party. This year, with country rock musician Kevin Mac headlining , the music was great. However, the local music seen was well represented with Old Enough to Know Better and The Crowd kicking out some jams.

There is so much to like about how this festival is organized that calling out everything that went well becomes a bit overwhelming.

Local artists and crafters have always played a part in making the day special. This year it seemed as though there were more than in past years, and the quality of what they were showing seemed better.

One of the nicest aspects of the festival is the emphasis placed on making this a family-friendly event. By partnering with Children and Youth Partnership of Dare County to insure kids have a positive and safe place to play, organizers have shown they understand what is most important to parents.

Every year in the past, the Seafood Fest has been an October day to look forward to. This year, though, it seemed as though everything came together—the food, the music, the crafts…and the weather.

Throw in a beautiful setting at the Nags Head Event Site on Ronaoke Sound, add it all up, and it was a fantastic Outer Banks party.

Sometimes there are so many things happening on the Outer Banks that we don’t quite get to mention everything until the event is past.

We’ll rack up the 2nd Annual Soundside Fun Fair to that explanation.

Fun Fair sounds great, but Carnival is what it really is.

A Great Time by Roanoke Sound

By no means is this a huge event, but the fun factor is off the charts with some great rides, fried dough, funnel cakes, arcade games…in short, everything expected in a traveling carnival.

Especially at night, with a breeze coming off Roanoke Sound, and the lights and sounds of rides and children laughing, it was magic. A step back in time perhaps, when the actual event eclipsed any vicarious experience.

Favorite ride? That’s a tough one. The lines were long at the Fireball where cars drop along a circular track, faster and faster until everything goes all the way around the circle.

Then there was the Scooter—bumper cars. It doesn’t matter that they have probably been around for 60 or 70 years at least. Adults, kids, anyone driving them is smiling an laughing the whole time they are bumping into cars and being bumped into.

The funnel cakes, fresh out of the fryer—amazing. There was also a red velvet funnel cake, but the consensus was, go for the original.

The Soundside Fun Fair is a major fundraising event for Children & Youth Partnership for Dare County (CYP)—a local nonprofit that has worked wonders in reaching out to families with children.

Given how important the CYP mission is and the success of the fair, we’re certain it will be back next year. 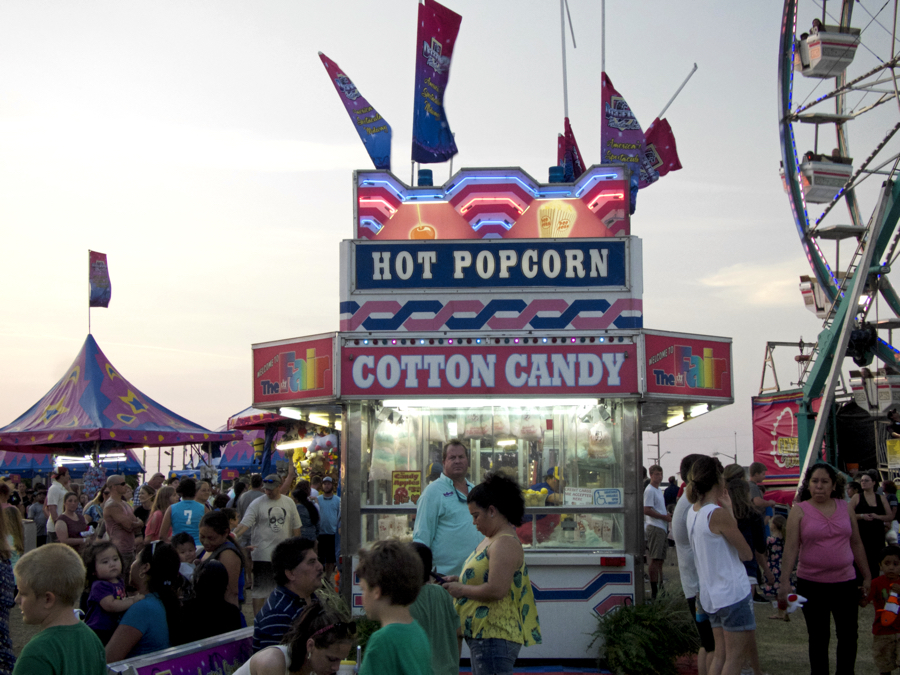 The carnival has come and gone. Really a shame because it was great fair—small but filled with fun things to do. And cotton candy, corndogs, hotdogs and hamburgers. And basketball hoops that always seem to be just a little bit smaller than the standard size.

Taking place at the Nags Head Evnet site and sponsored by Children and Youth Partnership of Dare (CYP), according to Executive Director Nancy Griffin, this one almost got away—that the opportunity came up about three months ago unexpectedly. Somehow the organization managed to pull it off, and the result has been four marvelous days for families. OK . . . four marvelous days for kids and the parents just sort of tag along, but there is something special in seeing a child’s face light up when they come off a ride.

The weather really cooperated as well. A bit hot today and it did get rained out toward the end, but there was a good breeze off the Roanoke Sound for all the days—and it was an evening event so the temperatures weren’t too bad.

Even though CYP was not able to get the word out as well as they had hoped, somehow, a few thousand people heard about it every night and the parking lot was filled with Outer Banks license plates–easy to tell, they’re the ones with “OBX” on them, a lot from Virginia and good sized smattering of visitors from other states.

The folks at CYP are already planning on brining the Carnival back next year, so we’ll look for a bigger and even better event next June.