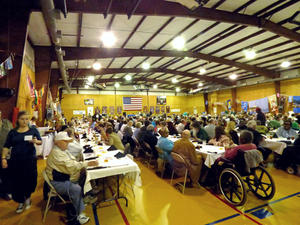 800+ participants with compainions at dinner on Wednesday night.

The 32nd Lions VIP (Visually Impaired Persons) Fishing Tournament managed to get in two out of three days of spectacular weather. The fishing was great-especially for those two days of incredible weather.

But the fishing isn’t nearly as important as the event.

As far as anyone can tell with over 800 participants and everyone who helps to make the three day event so amazing, the Outer Banks Lion’s VIP Fishing Tournament is the largest in the world. Just how many people come to the Outer Banks to be a part of the event really comes home at the awards banquet that was held on Wednesday at the Lions Hall at Wescott Park in Manteo.

There were people there from all over North Carolina; we spoke to people who came from Georgia, Rhode Island and New York. Participants came from as far away as Canada and states farther west, and everyone had the same sentiment, that this was a remarkable, even life-changing event.

The Tournament is more than the people coming to the Outer Banks-there is an amazing participation from local businesses as well. The northern fishing piers, Avalon, Kitty Hawk, Jennette’s Pier and Nags Head Pier all participated. The Crystal Dawn head boat took group after group out.