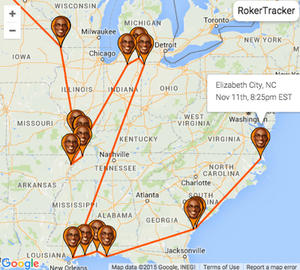 Al Roker&#39;s stops along the way to almost getting to Kitty Hawk.

Like a TV network version of the children’s book, Where’s Waldo, folks on the Outer Banks found themselves asking the question, &ldquo;Where’s Al Roker?&rdquo;

Scheduled to stop by Kitty Hawk this evening on his quest to do a weather forecast from all 50 states in one week, he never did make it to the Outer Banks. Not surprising, perhaps . . . but disappointing.

He did do his broadcast from Coast Guard Air Station Elizabeth City, tweeting out his change in itinerary saying, &ldquo;So sorry we’re running behind,&rdquo; indicating he couldn’t make the one hour trip from Elizabeth City to Kitty Hawk and back again and stick to his schedule.

Speculation had run rampant all day, the burning question was, Where? Where was he going to stand to do his broadcast? Guess we’ll never know now.

Looking over his itinerary for the day, the only surprise is that he came as close as he did to maintaining what had to be a brutal timeline. The day began in Slidell, Louisiana and will end in Charleston, West Virginia, where he’s headed as soon as he finishes in Elizabeth City. In between he stopped in Mobile, Pensacola, Savannah and Hilton Head. Some of it driving, some of it flying-but that’s a heck of a schedule.

So he didn’t get a chance to stop by and visit this time, leaving us with only one option: Al Roker, when you have some time, contact us here at Joe Lamb Jr., & Associates and let us show you what a great place the Outer Banks is.