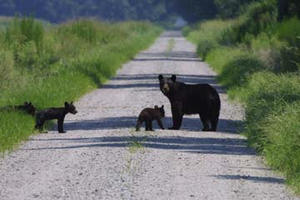 As a barrier island system, the Outer Banks is unlike any other barrier Island system in the world. It’s longer and at its greatest distance from the mainland, it is a farther from the continent that any other similar system.

But as different as the Outer Banks may be, the land immediately to its west is equally as unique.

Alligator River National Wildlife Refuge is about to celebrate it’s 30th anniversary, and the refuge is a seldom visited but remarkable example of how nature adapts to almost any environment.

Huge-at 154,000 acres, it is the second largest refuge on the East Coast (Okefenokee is larger)-it spreads across mainland Dare County and northern Hyde County.

The environment is a pocosin ecology-a word that means raised swamp in the Algonquin language. Poorly drained and nutrient deficient, the swamps nonetheless, support an extraordinary diversity of life . . . including the American alligator. There is also a thriving black bear population, the only red wolf population in the wild anywhere, a subspecies of deer that has adapted to the scarcity of food by remaining small and an extraordinary array of birds.

Alligator River is jointly administrated with Pea Island National Wildlife Refuge on the northern end of Hatteras Island. The Visitor Center is on old US 64 about two miles past downtown Manteo.