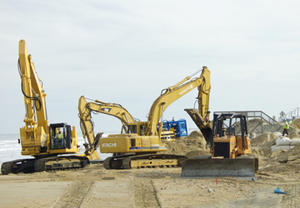 NCDOT is at it again-they’re fixing the Beach Road north of the Black Pelican in Kitty Hawk. They don’t have much choice in the matter really, since there’s no good way around that section of road and it’s too important a link to the rest of the Outer Banks to just let it go. Plus it is in the heart of Kitty Hawk.

The constant pounding of the late September early October seas coupled with two weeks of strong northeast winds really took their toll. The section of the road that had been repaired over the summer actually held up remarkably well, but the sea carved into the road north of the repaired area, tearing asphalt from the road bed for about 100 yards.

The repair process seems fairly straightforward and NCDOT is hoping to have everything done by mid December; that, of course, is weather dependent, especially during this time of the year.

To repair the road, and give it a firm foundation, a retaining wall is pounded into the sand; massive sandbags are laid down in an interlocking pattern. In the summer repair, 15′ sandbags were used; this time the sandbags will be 10′-massive either way.

After the sandbags are laid down, sand is graded over them and the road is repaved. The contract also calls for rebuilding the dune that was decimated. NCDOT is hoping to plant seagrass this summer to stabilize the dune.