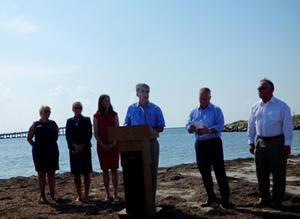 Press conference announcing the agreement between NCDOT and the SELC allowing construction of a new Bonner Bridge. Governor McCrory at the podium.

Falling somewhere between miraculous and historic, NCDOT and the Southern Environmental Law Center (SELC) have reached an agreement that will allow construction of a replacement span for the Bonner Bridge to go forward without further legal action. The bridge, linking the northern Outer Banks with Hatteras Island has been slated for replacement for over 10 years.

Representing Defenders of Wildlife and the National Wildlife Refuge Association, the SELC had been battling NCDOT in court for four years, and the agreement involves compromise on both sides. The SELC will cease legal action and allow the parallel replacement span for the aging bridge over Oregon Inlet to be built.

NCDOT will revisit the hot spot alternatives in the southern part of Pea Island National Wildlife Refuge that they were going to bridge. Instead they have agreed that the preferred alternative will be to reroute the road to the west into the Pamlico Sound.

There are still hurdles to cross-US Fish & Wildlife will have to issue a new right of way for the proposed routes in the sound; no one know what the Bonner replacement bridge will cost. Four years ago the price tag was $215.8 million, but state officials acknowledge the cost of construction has gone up.

However, none of the remaining barriers should keep the project from moving forward.