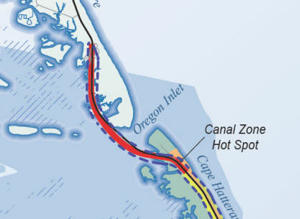 Who knows? Maybe a replacement span for the Bonner Bridge may actually happen within a typical person’s lifetime. A press release from the SELC and NCDOT indicate the longtime foes are in &ldquo;confidential . . . discussions&rdquo;, to quote from the joint statement, to find a way to move forward.

Twenty years past its predicted lifespan, it’s still safe to use the link between the northern Outer Banks and Hatteras Island, mainly because of the time, effort and money NCDOT has put into it, but it is becoming more and more expensive to keep the bridge safe, and a replacement span is long overdue.

What seems to have sparked the talks was a ruling from the US Appeals Court that seemed to favor each side. On the one hand the court found that NCDOT had followed the law in developing their environmental impact statement. However, the Court agreed with the SELC that there had been a procedural flaw that had to be reexamined by the lower court.

It’s been three years of constant legal battles, and although no one is saying why the two sides are now in conversation, it may be that simple legal exhaustion-and the price tag involved-has taken its toll.