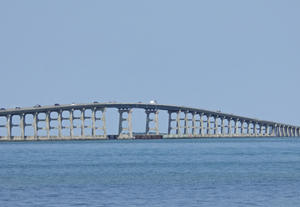 That’s one small step for a new Bonner Bridge but one large step to dotting the i’s and crossing the t’s to get the replacement span built. The National Park Service has just signed off on the a Record of Decision for the new bridge, and that may not seem all that important in the big scheme of things, but without the RoD from the Park Service, construction on Cape Hatteras National Seashore property can’t happen.

The RoD was expected-the NPS had already indicated they would issue it, but it’s still good to have the document in hand.

A new bridge is still a two-and-a-half or three years in the future-the hoped for completion date is 2018. The project also include a more permanent span in the area where the temporary bridge is just north of New Inlet and bypassing the S Curves on Pea Island.

Construction has not begun yet. NCDOT and engineers are finalizing plans that were put on hold during the lawsuits that halted the project. When the plans are finalized there will be permits needed from the U.S. Coast Guard and US Army Corps of Engineers. Although the permitting process is complex for those permits, NCDOT officials do not expect problems in having them issued.

If all goes as planned, construction should begin in the spring of 2016.