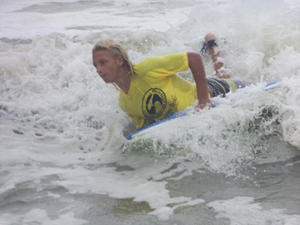 Hard to imagine, but they’re getting the ESA Eastern Surf Championships in at Jennette’s Pier. Conditions are pretty rough, certainly nothing for a novice surfer to be in the water, but somehow among the 25mph NE winds, 6-8′ waves and severe chop competitors are getting some good rides.

Body boards were on the water today. There weren’t a lot of individual rides, but when they caught a wave it was good long trip. Battling back out in today’s conditions took some time, so the number of rides was down.

The weather on the Outer Banks certainly is not cooperating this week. There’s a low pressure system south of Hatteras taking it’s good old time to move west and come ashore somewhere in South Carolina . . . at least that’s what the forecasts call for.

In the meantime, it looks like four or five days of strong NE winds, 6-9′ seas, and every once in a while the heavens open up and a good soaking rain falls.

This week has a lot scheduled, but it looks as though the big event is going forward. Bring umbrellas, rain jackets and anything waterproof to Roanoke Island Festival Park for the 4th Annual Outer Banks Bluegrass Festival. It’s an outdoor event and there’s really no way to reschedule.

The Dare County Arts Council is waiting until tomorrow (Thursday) to make a call on its Artrageous festival at Rec Park in Kill Devil Hills. Although the call hasn’t been made yet, an educated guess is they’ll be moving it to the Saturday, October 31 rain date.