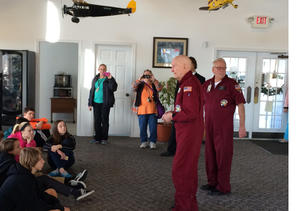 The Candy Bomber-a restored C54 transport plane-has made the journey to the Outer Banks every year since 2000. This year Lt. Colonel Gail Halvorsen (USAF, Ret.) who was the Candy Bomber in 1948.

Listening to the Colonel talk about his experiences is a like taking a guided tour into a piece of history that is almost forgotten but resonates as he recalls his experiences.

He was a 27-year-old First Lieutenant flying cargo planes in Europe when the Soviet Union closed all land access to Berlin. At the time the Germany was divided into sectors of control with the British, French and Americans controlling West Germany and the Soviets East Germany.

Berlin, in the heart of East Germany was also divided and in June of 1948 the Soviets cut off all land access to the city believing that if the residents could not get food and supplies they would turn to the East Germany and become part of the Eastern bloc of nations.

The Allies began the Berlin Airlift, to this day the largest and most sustained airlift ever mounted-and through their efforts kept a city of 2,000,000 alive.

Halvorsen went beyond the call of duty, and in an act of compassion started dropping candy bags attached to homemade parachutes to kids at the gathered at the end of the runway.

He didn’t ask permission; he just did it because he thought it was the right thing to do-which almost got him in a lot of trouble with his commanding officer.. The word came down though, that that small act of kindness by one American pilot had a tremendous effect on morale, and soon all of the American planes were dropping candy to the children of Berlin.

Colonel Halvorsen is 94-years-old now. He came with the Candy Bomber to the Dare County Airport this year. And energetic man with a wonderfully positive attitude toward life, he is wonderful example of a life well-lived.