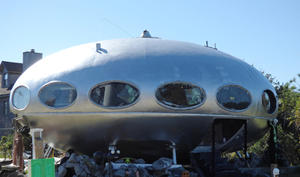 A beautiful, beautiful day on the Outer Banks. I had some things I had to do down on Hatteras Island and, gosh, what a heartbreaker to have to drive down there today.

Hatteras Island is about as nice a day trip from the northern Outer Banks as there could be. It takes about an hour and a half of straight driving to get from Kitty Hawk to the Graveyard of the Atlantic Museum just past the Ferry Terminal.

But, hey . . . stop and smell the roses along the way . . . or dig your feet into the sand. Check out an art gallery, walk the beach. And by all means, stop by the Futuro house in Frisco.

The Futuro home is one of a handful of the concept homes left in the United States that were built by a Finnish designer in the 1960s and 70s. It looks like a flying saucer-really.

The idea was to fabricate a house from plastic and resin, and put it together like pieces of a pie. Because the structure rests on pylons and the prefab pieces were light enough for a helicopter to lift, they could be placed just about anywhere.

This time of year, a little green man stands outside and waves to traffic.

A lot of fun and worth stopping for.