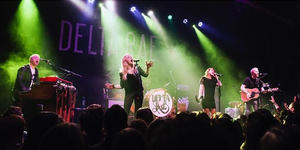 A great end to the week as July comes to a close-something for kids and the family and a great show coming up at Kelly’s Outer Banks Tavern.

It’s great fun for the whole family-and Kitty Hawk Kites is bringing in a waterslide this year so pack a bathing suit.

Friday evening Delta Rae is playing at Kelly’s Tavern in Nags Head. The band is based out of Durham, but this is a national act that sings with power and amazing skill. The words, and music at times, are haunting, even troubling, but the skill of the musicians shines through. Their sound is a cross between rock, country with some gospel harmonies thrown in.

They first showed up on the Outer Banks music radar three years ago at the Mustang Music Festival and even though they were not the featured act, for a lot of the people attending they were talk of the show.

It would be difficult to imagine a better way for music lovers to cap a great week at the beach.

Tickets are $30 for the show and it&#39;s an almost sure bet that it will be a sold out performance.