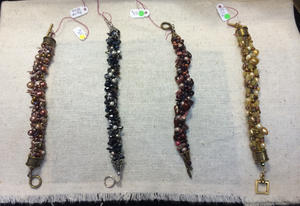 The artwork was the star at the 3rd Annual OBX Arts &amp; Craft Festival was amazing. Twenty-five booths in the Hilton Garden Inn in Kitty Hawk and everyone was different.

It got is start artist James Melvin and potter Charlotte Alexander wanted to put together an artist’s show on the northern Outer Banks. Manteo had it fair share of shows, and Hatteras runs a number of craft fairs over the summer, but there was nothing on the north end.

They took their idea to hotelier Sterling Webster (who just passed away), owner of the Hilton Garden Inn, he liked their concept, liked that funds left after paying for the event would go to local charities-this year N.E.S.T. and the Outer Banks Relief Foundation-and gave the founders a great price.

The artwork is wonderful. Two personal favorites . . . the range of creativity that Randy Hodges manages to demonstrate with his blacksmith art has to be seen to be believed.

The other personal favorite is the art of James Melvin. Many people know him from the drawings he does for Suzanne Tate’s Nature Series children’s books, but his paintings are remarkable for their ability to evoke the mood and color of an event. Certainly worth second, third and fourth looks.

when. Demonstrating an extraordinary range of media, styles and genres, walking around the booths the skill of the Outer Banks artists became apparent.