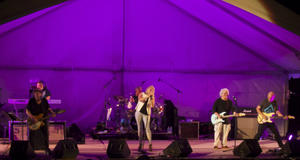 The Jefferson Starship concert at the Lost Colony Sunday night was about as perfect setting as could be. A light breeze off Roanoke Sound, the evening temperatures were in the upper 70s and the music . . . amazing.

The band may have been around for the past 40 some years and their roots go back even farther than that, but they still know how to rock the house. The two original band members, Paul Kantner on bass and David Freiberg on rhythm guitar and vocals, are still on top of their game after all these years.

Freiberg especially stood out for his vocals, and this from a guy who seems to be 77 years old. We know his age because he mentioned 70 years ago he attended 2nd grade in Manteo.

One of the neatest things noticed was the age range of the audience, from early 20s to retired couples . . . and everyone know all the lyrics.

It’s difficult-if not impossible-to pick out a favorite moment from the evening. Lead guitarist soloed on electric guitar playing tribute to Jefferson Airplane guitarist with a wonderful version of &quot;Embryonic Journey&rdquo;.

Lead singer Cathy Richardson killed it on &ldquo;White Rabbit&rdquo;, their encore song, &ldquo;Volunteers&rdquo; was pure energy and a lot of fun.

Next up in the Lost Colony’s Waterside Concert series is Resurrection-A Journey Tribute on Sunday, August 2.