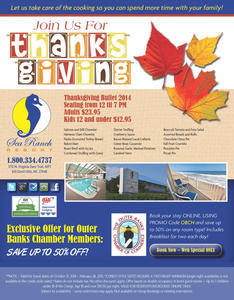 Thanksgiving week is officially here which in some ways is one of the busiest weeks of the year here on the Outer Banks. Seems a bit counterintuitive because . . . well, the weather isn’t alway all that great this late in the season.

Thanksgiving, though, being probably the best family holiday ever-what can be better than lots of food surrounded by people who genuinely love care for one another-seems to bring our property owners to the beach with their families.

That’s one of those great reasons for owning a home at the beach, the chance to getaway with your family when it means the most.

Of course, one of the problems is, after spending six or seven hours in a car getting to the destination, a lot of people don’t feel like spending an extra hour or two shopping for Turkey Day dinner and then putting in another half day preparing it.

Luckily, a number of Outer Banks restaurants have stepped forward to relieve the stress of Thanksgiving in the kitchen.

Here then is the Joe Lamb Jr., & Associates list of restaurants that are serving Thanksgiving Day dinners. Some are buffet, some offer table service and some fix the meal to be popped in the oven for a couple of hours.

We may have missed one or two, so if a favorite is not on the list, call and make sure we didn’t miss it.