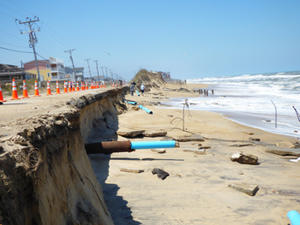 Damage along the Beach Road in Kitty Hawk.

The nor’easter that came through the Outer Banks on Wednesday and Thursday wasn’t much as these things go. It was windy, kind of nasty, definitely colder than it should have been. A little bit of rain, but not too much. It was a fast moving storm and for anyone who has lived on the Outer Banks for any length of time, it was inconvenient but no big deal.

Then we woke up on Friday morning to find out that the storm had undercut a section of the Beach Road in Kitty Hawk just north of the Black Pelican and taken out-completely taken out-the dunes beside the beach access stairs at the end of East Kitty Hawk Road.

Wow! For those of us who have lived here for some time, this was really surprising. It will all get repaired, of course-and NCDOT has been really good about getting on top of these situations, but it is a reminder that there is a lot of power out there in the ocean.

It’s also a nudge to move forward with beach nourishment. The town of Kitty Hawk is one of the Outer Banks towns that has signed on to an interlocal nourishment project with Dare County. If things go as planned, process will begin later this year with nourishment probably two years off.

In the meantime-avoid that short strip of the Beach Road until it’s fixed.