A Play Worth the Memories

It’s never too early to celebrate success and with the 80 anniversary of The Lost Colony coming this summer, it seems like a good time to call attention to America’s longest running outdoor drama.

Written by Pulitzer Prize winning playwright Paul Green, the play tells the story of the first attempt by the English to colonize the New World. The story itself is exciting and Green did an outstanding job of telling the tale, but the play has remained successful because it’s production values and special effects.

The list of outstanding actors who have been a part of the cast is too long to list here, but just a short sampling gives some idea of what to expect for an evening of entertainment.

Andy Griffith was part of the cast for three years; Carl Kassel of NPR fame was Chief Wanchese in 1952; Tony Award winning designer William Ivey Long has been associated with the play for years.

Seeing a play outdoors is a different experience. Located on the north end of Roanoke Island there is usually a breeze coming off Roanoke Sound in the evening, although it does get warm sometimes.

However, the setting itself is magnificent. Bordering on Fort Raleigh National Historic Site—the theatre is actually on park grounds—the walk to Waterside Theatre is beautiful. Lined with trees, with the scent of a forest part of the experience, it feels almost as though a walk to the past is occuring. 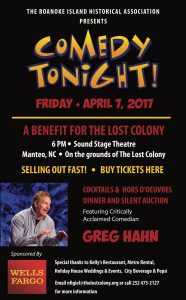 There is a benefit show for the Lost Colony coming up Friday, April 7.

Greg Hahn will be bringing his insanely energetic humor to the Soundstage Theater. The Soundstage Theater used to be the dressing rooms and storage for The Lost Colony production, but improved facilities closer to the stage allowed the building to be converted to an indoor theater.

Hahn is a master a poking fun at the every day foibles of our lives. He seems to be a comedian who knows how to get some laughs with jokes that are safe for almost everyone in the family.