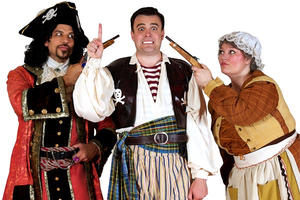 The Pirates of Penzance is coming to the Outer Banks! And not just any production of the classic Gilbert and Sullivan operetta-the play will be performed by the New York Gilbert &amp; Sullivan Players, generally considered the finest Gilbert and Sullivan theater group in the country.

Mark September 18 on the calendar as the date this wonderful send up of the military, pirates and society in general will take the stage at the First Flight High School auditorium.

Brought to the Outer Banks through a cooperative effort of the Outer Banks Forum, the Don and Catharine Bryan Cultural Series and OBX Pridefest, this is Gilbert and Sullivan at their absolute whackiest best-and whacky is seems the best way to describe the plot line . . . or what little there is of it.

The basic premise holds that a boy was apprenticed to be a &ldquo;pirate&rdquo; because his nanny was hard of hearing and mistook &quot;pilot&quot; for &quot;pirate.&quot;

Luckily as the play begins, he’s 21 and his apprenticeship is over-except as it turns out he was born on February 29 and he’s really only five years old. His engagement and marriage will have to wait, although his true love has agreed to give her heart to no one else until he is released from his apprenticeship.

Featuring unforgettable tunes and riotous lyrics with the best known probably &ldquo;I Am the Very Model of a Modern Major-General&rdquo;, the play debuted in New York in 1879 and the humor is as fresh and funny today as when it was written.

Tickets are available online from either the Outer Banks Forum or the Don and Catharine Bryan Cultural Series, or at Duck&#39;s Cottage Coffee &amp; Books in Duck, Downtown Books in Manteo, Grays Department Store in Kitty Hawk and Sea Green Gallery in Nags Head.