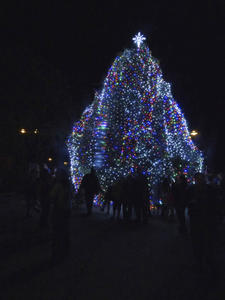 It sure is nippy outside-not quite as cold as the rest of the East Coast but a high temperature struggling to reach 50 is cold for the Outer Banks, especially in November. Probably a little more like December, although even December isn‘t usually quite this cold.

Since December has been mentioned, it’s a good time to take a look at December activities, because the calendar is really close to filled-especially on weekends.

Santa will, of course, be exhausted after his multiple visits to every site imaginable on the Outer Banks.

The best known sighting of the &ldquo;fat jolly old elf&rdquo; is probably Kitty Hawk Kites &ldquo;Hangin with Santa&rdquo; November 28 and 29, with Kites with Lights painting the evening sky over Jockey’s Ridge State Park on Saturday.

Just about the biggest event of the season is the annual Tree Lighting in Manteo, which is a wonderfully small town Americana. That’s on December 5th. Bundle up; if you have little ones, expect to wait a bit to see Santa, but he will be there.

That same weekend Nu-Blu will be presenting their first ever Christmas show Friday, December 5-7. Nu-Blu is a bluegrass band that’s garnering a lot of attention. Their take on bluegrass is just a little bit different and their musicianship amazing. The just played for the Dare County Arts Council’s Veterans Writing Weekend and really wowed the audience.

Tickets for the show are selling quickly, so if interested don’t hesitate.

For anyone thinking of a long weekend getaway, that first weekend in December would be perfect.

That’s just a taste of what is coming up in December. We’ll come back with more later.