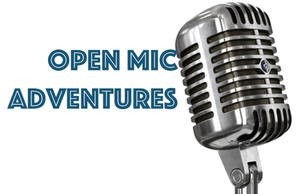 Grab your guitar, mandolin, banjo, ukulele, sax, trombone . . . any instrument will do and head out to take a tour of the Outer Banks music scene. This isn’t a listening tour, though. It’s an open mic tour and for the hidden rock ‘n’ roll star, the jazz aficionado or bluegrass master, this is a chance to sit in with some really talented musicians and have some fun.

The open mic is a once a week happening at all three locations. Scott Franson is the host at the Jolly Roger, with music taking over the bar at 9:00 p.m. Look for Monte Hooker at Art’s Place starting at 7:00

Who knows who the house band will be at Kelly’s, but they’re always really good. The other night it was Bill Rea on bass and Buzz Bissette on keyboards, two of the best musicians on the Outer Banks. Look for the open mic at Kelly’s at 8:00 p.m. on Wednesdays.

There’s a choice of how to play-some people like to get up and do a solo set, others enjoy sitting in with the band. Some people just like to listen and a lot of the sounds are really good.

One other open mic that comes around once a month is a little bit different. The Dare County Arts Council sponsors a literary open mic the second Thursday of every month at Glenn Eure’s Ghost Fleet Gallery in Nags Head. Poetry, prose, essays, short works-it’s all welcome. Free coffee and snacks, the reading starts at 6:30 p.m.