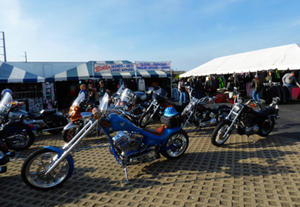 Motocycles lined up outside Longboards in Kitty Hawk.

They ran the Flying Pirate Half Marathon this morning, the course winding through the maritime forest of Kitty Hawk Woods, past Kitty Hawk Bay and the Wright Brothers Memorial, into Nags Head Woods and finishing in Nags Head. The route is the first half of the Outer Banks Marathon and it is a beautiful run.

The bikers weren’t awake yet when the run began-that’s the bikers who are down here for the 13th Annual Outer Banks Bike Week. It’s actually a week plus a day, running from last Saturday, April 18 through next Sunday. It’s a week filled with poker runs, live entertainment and day trips to destinations all up and down the Outer Banks.

There’s a traveling retail tent show that seems to follow Bike Weeks where ever they go, selling everything from leather jackets to hard to find parts. LED lights seem to be the big item this year.

The news for today, though, was the Flying Pirate Half Marathon. Sponsored by Outer Banks Sporting Events, the same folks who put together the Outer Banks Marathon in November, the race had almost 1700 finishers this year. The weather was about as good as it gets for a distance run-early morning had a light fog and no wind and the temperatures never climbed out of the 50s.