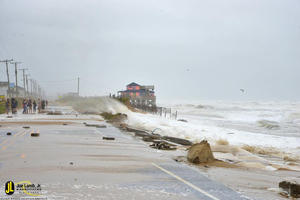 We were hoping to write about some of the great things that are happening this weekend on the Outer Banks-and in spite of the weather, there has been a lot happening.

The UNC Coastal Studies Institute hosted their bi-annual DASH (Design+Art+Science+Humanities) Festival and wow (!) was it cool. It included the Surfalorus Film Festival with some awesome independent films about surfing-everything from three minute shorts to feature length movies. Some great merging of science and the everyday as well. We’ll have to come back to that at a later date; it’s great stuff.

Jim and Sandy Williams, owners of Hairoics, celebrated their 25th Anniversary of being in business-it was a great time with some wonderful people.

Unfortunately the weather is forcing itself into the headlines.

The Outer Banks is actually holding up remarkably well; however, there are some things to report that are important to know.

The Beach Road-NC12-north of the Black Pelican has been closed. That is the section that was repaired after the late season nor’easter undermined the road. It’s sort of a good news/bad news scenario. As far as we can tell, the sandbags and retaining wall that holds them in place are still intact. The dune, though, is completely washed out and the road is impassable.

There is also considerable overwash on Hatteras Island, although we have not had any reports of NC12 being closed yet.

Weather reports indicate that we have another 24 hours of damaging surf and high winds, which will include two more cycles of high tides.