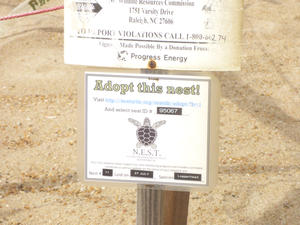 I took a walk this morning an I saw something I really didn’t expect to see on the beach in Kitty Hawk. A sea turtle nest.

Well, I didn’t actually see the turtle nest, just the area marked off that indicates there are eggs incubating in the sand.

I suppose I should not have been so shocked-sea turtle nest are all along the Outer Banks, and actually fairly common, although there are a few more recorded south or Oregon Inlet.

The nest was identified by N.E.S.T. (Network for Endangered Sea Turtles) an Outer Banks group that have been in the forefront of educating the public about sea turtles and protecting their habitat.

The biggest concern , other than inadvertent damage. are bright lights when the turtles hatch. Lights confuse them and they will move to the light instead of making a beeline to the ocean.

We’re getting very close to the prime time of the year for a hatching, officially called a boil. It’s pretty exciting when the turtles do hatch as 50 or 60 miniature versions of an adult turtle that typically weight 200+ pounds all scramble for the surf. Actually this was identified as a loggerhead nest, so we&#39;re looking at a turtle weighing between 300-500 pounds.