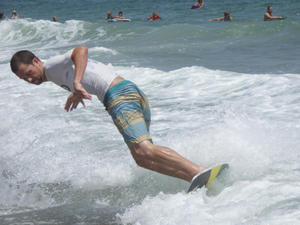 Summertime on the Outer Banks and there is no way of telling what events or happening might come up. That comes to mind because the Outer Banks Skim Jam is happening this weekend in Kill Devil Hills at the beach access by KMart.

Skim boarding doesn’t have the acclaim as surfing or kiteboarding but it’s definitely a sport and watch the competitors for a while it’s pretty clear they’ve taken dropping a flat board in 2&rdquo; of water to an art form.

Sponsored by Skimcity, this is a pro/amateur competition, and judging by how many people were on hand watching and how many little kids were there trying to mimic the pros, it seems apparent it’s a sport that’s been flying under the radar for a while but may be catching on.

Competition is set up very similar to surf contest rules; four competitors have a set amount of time to skim as many waves as they can. Same divisions too, with age ranges from the youngest to masters.