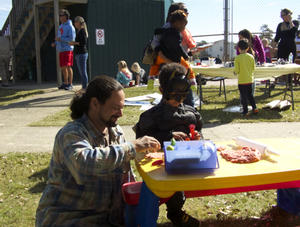 Batman working at his craft with a helping hand from his father at Artrageous 2015.

Halloween on the Outer Banks is probably a lot like Halloween everywhere-lot’s of miniature superheroes, princesses, ghost, goblins an witches.

There are always the special places to go; the area surrounding First Street in Kill Devil Hills is a madhouse for about three hours on Halloween night with what appears to be almost every child on the Outer Banks descending on the homes. Back in Kitty Hawk Landing there’s a lot of candy to be had, but that’s really local’s type of thing, because KH Landing is buried far back in Kitty Hawk.

This year, though, thinks were a little bit different. The Dare County Arts Council’s Artrageous celebration of the arts in Dare County had been postponed in September and the new date was Halloween.

Somehow it all seemed perfect for the day. Held at Rec Park in Kill Devil Hills, Artrageous is truly n family event, with parents spending the day with their kids checking out the face painting, or running with one of the open parachutes Kitty Hawk Kites had at the event, or creating a comic book story with images.

Because Rec Park is where the football fields are, there are always some kids there still in pads, some still wearing their jerseys. This year what made it so much more fun were all the kids dressed up as zombies, batman, ballerinas or ghouls.

Artrageous has always been about the joy of creativity; this year it seemed as though there was a little something extra.